Many readers are of the opinion that Walliams is the natural successor to Roald Dahl, and I couldn’t agree more. Neither of them talk down to their young readers, instead whisking them along for exciting, perilous adventures and fairytale capers of love and friendship and of course, great dollops of horrid, hairy, farty things.

Dahl is responsible for the bookworm I am today. As a child his stories were eye-popping! They made me go “ooh” and “wow,” “eeeuuuuww” and “ARRRGHHH” in equal measure. Walliams possesses that same talent. I have read all seven of the Little Britain actor’s previous children’s novels and loved them all but this might be my favourite yet.

This is a story of a young boy called Jack whose Grandpa has become confused in his old age. He believes he is back in World War II saving the skies as an RAF Spitfire pilot. Only Jack understands him and sets out to rescue him from END_OF_DOCUMENT_TOKEN_TO_BE_REPLACED

A SCREAM IN SOHO: A BRITISH LIBRARY CRIME CLASSIC

This is definitely one of the better books from the British Library’s recently republished Crime Classic series. As with the other novels in this series it is a thing of beauty. They all have magnificent cover illustrations and quality pages that have made them hugely popular and highly collectible among my friends and fellow bookworms. For some of these books, sadly, the cover remains the best thing about them but thankfully this is not the case here.

Brandon’s story is a gruesome and gripping caper around London’s Soho set during the blackouts of the Second World War. A piercing scream rings out in the night and a bloodied knife is found. Our hero, Detective Inspector McCarthy, is soon on the scene and following a hunch. This is a gloriously dark, seedy Soho underworld full of Italian gangsters, cross dressing German spies and glamorous Austrian aristocrats.

Wry McCarthy is likeable and engaging for the reader as he attempts to unravel the connection between some brutal killings and the theft of the secret defence plans. There are exciting fight scenes and chases and a pleasurable, gentle amount of suspense and drama. The supporting cast flesh out the story well and knowing the area well like I do I was able to picture the streets as McCarthy hightailed after his icy-eyed villain.

THE GOOD LUCK OF RIGHT NOW BY MATTHEW QUICK

The Good Luck Of Right Now is another wonderful novel from the author of The Silver Linings Playbook, Matthew Quick. Thirty nine year old Bartholomew Neil is in therapy following the death of his beloved mother. Bartholomew is a damaged guy who knows that after a lifetime of living with and then caring for his mother, he has to find his own way in the world. As he attempts to find his flock he falls in love with a strange “girl librarian”, his drunken Priest moves in and he gets to complete his first life goal thanks to a foul-mouthed and equally troubled cat-obsessed young man.

On the edge of madness he writes to Hollywood actor Richard Gere (whom his mother adored) for guidance and to offload his emotions. The whole of this quirky, unconventional page turner is told through those letters to Gere which at first I found a little irksome from but soon I realised it was the perfect vehicle for Bartholomew’s delusional outlook. Quick’s devastating prose is shot through with wit and a clever balance between an optimistic but unsentimental view of human nature.

Elizabeth, Max, Father McNamee and of course Bartholomew are all seriously flawed but deeply loveable characters that I determinedly rooted for them to overcome the prejudices and cruel blows dealt to them in life. Beautifully tender and gripping from the first page to the last, this offbeat and eccentric tale is another winner by this enormously talented American writer. A kind hearted story about humans rescuing themselves, and each other, from despair. Really great.

Notes on the author – Matthew Quick:

AS CHIMNEY SWEEPERS COME TO DUST

As I’ve said before the Flavia De Luce novels are my absolute favourite and us fans have been counting down to the seventh installment in this fantastic series – As Chimney Sweepers Come To Dust – for what seems like forever! The last book The Dead In Their Vaulted Arches finished on a most exciting and unexpected cliffhanger.

Here, we pick up our brilliant young Flavia at her impertinent best as she finds herself “banished” from her beloved Buckshaw home in Bishops Lacey and “packed off” to her mother’s old boarding school in Canada.

Flavia takes an instant dislike to her escort across the Atlantic – Ryerson Rainsmith: “On paper, the man was already dead.” When she finally arrives at Miss Bodycote’s Female Academy she finds it full of bizarre rules, an intimidating headmistress (“The woman’s moods appeared to be connected to some inner weathercock that swung wildly round with every word. One moment she was almost tender, and the next a harridan”) and a murderess among the teachers. All isn’t as it seems with the resident girls either who disappear with alarming regularity.

Flavia starts to realise that the game is afoot and as a budding chemist and amateur poisons expert, she is soon on familiar ground when a body falls from the chimney in her room and she is dealt another gruesome puzzle to investigate. Through the unraveling of this mystery, Flavia begins to discover what it means to be her mother’s daughter and what the true purpose of the Academy really is. END_OF_DOCUMENT_TOKEN_TO_BE_REPLACED

GOING OFF ALARMING BY DANNY BAKER

I wouldn’t say I’m a fan of Danny Baker but the sight of my husband absolutely shaking with mirth whilst reading the second volume of his autobiography was enough to convince me to get reading it myself. Boy, I’m glad I did!

Danny Baker is best known for his work on TV shows, for hosting football phone-ins on the radio, for being the star of the “Daz Doorstep Challenge” adverts and for being temporary tabloid fodder for his mid-1990s hijinks with Chris Evans and Paul Gascoigne. He has worked with all the comedy greats – Ken Dodd, Tommy Cooper, Spike Milligan, “a self-lacerating” Frankie Howard and has great yarns to spin from all of these meetings.  Keeping a furious Kenneth Williams waiting and then later on name-dropping the Carry-On star to buy his first house is particularly cracking material.

It’s hard to suck up that Baker is one of life’s lucky blighters who always come up smelling of roses. He has walked between the raindrops (a chapter heading here) and led a charmed life. But this is what sets his story apart from the run of the mill celebrity biographies clogging up supermarket bookshelves. There is no rags to riches, no point at where it all went wrong. Instead this is the story of an original Cockney boy getting away with it over and over again.

His is not an autobiography in the traditional sense. There is very little “I did this, I did that” going on here. Baker is far too clever for that. A natural and endearing raconteur, his amazing career twists and turns are merely squeezed in between hilarious and often unbelievable anecdotes. His recollections of Davey The Dwarf and the Rag and Bone Man story are particular favourites of mine. Even funnier and incredulous than volume one, I warmed to the witty wordplay and life experience of this writer and broadcaster. (Although I still find him a very smug and bumptious personality!)

However, just like his first book, Going To Sea In A Sieve, the star of the show is not the man himself but most definitely his docker father known as ‘Spud.’ An absolute character of a man with wheeling and dealing ways, a brazen attitude towards authority and financial affairs and a firm belief that everyone can be bribed, claiming; “they’ve all got their hand out.” I was choking on my own stifled guffaws on a train through West Sussex as Baker described in perfect detail Spud’s Sunday routine of elaborate ablutions and preparing the cockles for tea. Even the title of the book, Going Off Alarming, END_OF_DOCUMENT_TOKEN_TO_BE_REPLACED 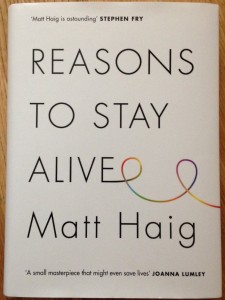 This is such an important book. If you have depression, anxieties or other mental illnesses, I cannot recommend this book highly enough to you. Buy it and read it now. It might just save your life.

Aged 24, Matt Haig found himself stood on the edge of a cliff about to jump. He could see no way to go on living. Reasons To Stay Alive is the story of how he came through the depression that got him to that point and overcame an illness that almost destroyed him. In this part-memoir, part self-help book, he shares with us the reasons he found to not just stay alive but really learn to live again.

Mercifully, there are no trite inspirational quotes or meaningless platitudes here. This book is true and the advice he proffers on how to live better, love better and feel more alive is honest, helpful and real.

I have suffered from depression on and off for most of my adult life. This year I have been experiencing particularly bad episodes of it. So it was with great fortune that I looked up Matt Haig on Twitter recently to see if he was writing a follow up to his excellent novel The Humans, only to discover he had just published Reasons To Stay Alive. I bought it and began to read it immediately. It came at a really vital time in my life.

Haig has written this book to lessen the stigma that still exists around depression (unlike any physical illness) and to try to convince people “that the bottom of the valley never provides the clearest view.” He perfectly describes depression as “like walking around with your head on fire and no one can see the flames.” “Depression,” he says “reveals what is normally hidden. It unravels you, and everything you have ever known.” Indeed his list of symptoms are frightening and show this debilitating illness in all its infinite darkness. END_OF_DOCUMENT_TOKEN_TO_BE_REPLACED 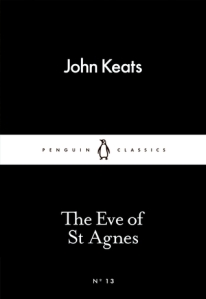 THE EVE OF ST AGNES BY JOHN KEATS

I read this in a couple of hours on the train coming back from seeing Morrissey in Cardiff. Moz would be proud! I have only ever read the odd line and letter by Keats and have vowed this year to fully discover the Romantic poet’s best work. This seemed an easy place to start. Sort of. Due to the age of the language in these selected poems published in 1820, I had some difficulty following the plot and had to do a bit of online research to aid my comprehension.

The Eve of St Agnes is a 42 stanza poem based on the superstition that a girl could see her future husband in a dream if she performed certain rituals on the Eve of St. Agnes. This meant going to bed without any supper, laying on her bed completely naked with her hands under the pillow and looking up to the heavens. The proposed husband would then appear in her dream, kiss her, and feast with her. In Keats’ poem the girl is Madeline who pines for the love of Porphyro.

Although I stumbled on the plot, I just loved reading the beautiful words, so lyrical and sensual.

But no – already had his deathbell rung, the joys of all his life were said and sung END_OF_DOCUMENT_TOKEN_TO_BE_REPLACED

Thank you for visiting The Southsea Bookworm's reading blog. I'll be updating this site regularly with the latest books I have devoured -for better or worse! I will also be revealing past favourites.